Charlie, aged 11, was delighted to see his sketch and name on the door of a Sheehan Group lorry when it visited the school. The sketch has been placed on several lorries to help promote recycling. Fellow pupils Kara Axtell, Year 5 and Jessica Sikorska, Year 4 also received book tokens from the Sheehan Group as runner-up prizes. 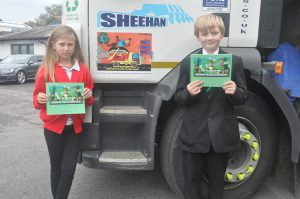 The competition took place as part of a series of visits and workshops at the school by the Sheehan Group to educate youngsters on the benefits of sustainable living. Children were treated to a special reading of the story of ‘Captain Envirotron and the battle to save planet earth’, by its author Tara Sheehan, Finance Director at the Sheehan Group. Tara wrote the children’s book to further educate youngsters on the value of recycling and the Sheehan Group has donated copies to several school libraries across Oxfordshire.

Tara said: “Recycling and sustainable construction is at the heart of the Sheehan Group’s values. The visits to the school were great fun and we enjoyed sharing our passion and knowledge. Hopefully the colouring-in competition and the book has helped generate an interest in recycling among children and parents in Oxfordshire. We’re grateful to the West Kidlington School for welcoming us and for such a brilliant response from the children.”

Joanne Simpson, Assistant Principle of the West Kidlington School, said: “Recycling and sustainability is so important and a big thank you goes to the Sheehan Group for really engaging with the pupils on this topic. The children loved the book and the colouring-in competition as well.” 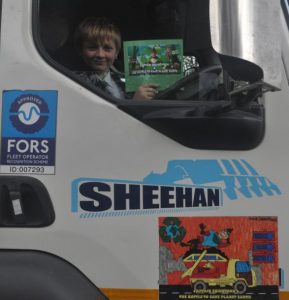 Charlie Hawkins said: “It’s great to see my drawing on the trucks, I didn’t really expect it. There were a lot of good drawings, so it was nice to be selected. It’s been great to learn about recycling and how important it is. My uncle used to work in the Sheehan work-shop so my family were really pleased when they heard about my drawing going on the trucks.”

Kara Axtell added: “I love drawing and it’s been great fun taking part in the competition and learning about recycling. The Captain Environtron book is brilliant, I love fiction and one day I want to write a book too.”